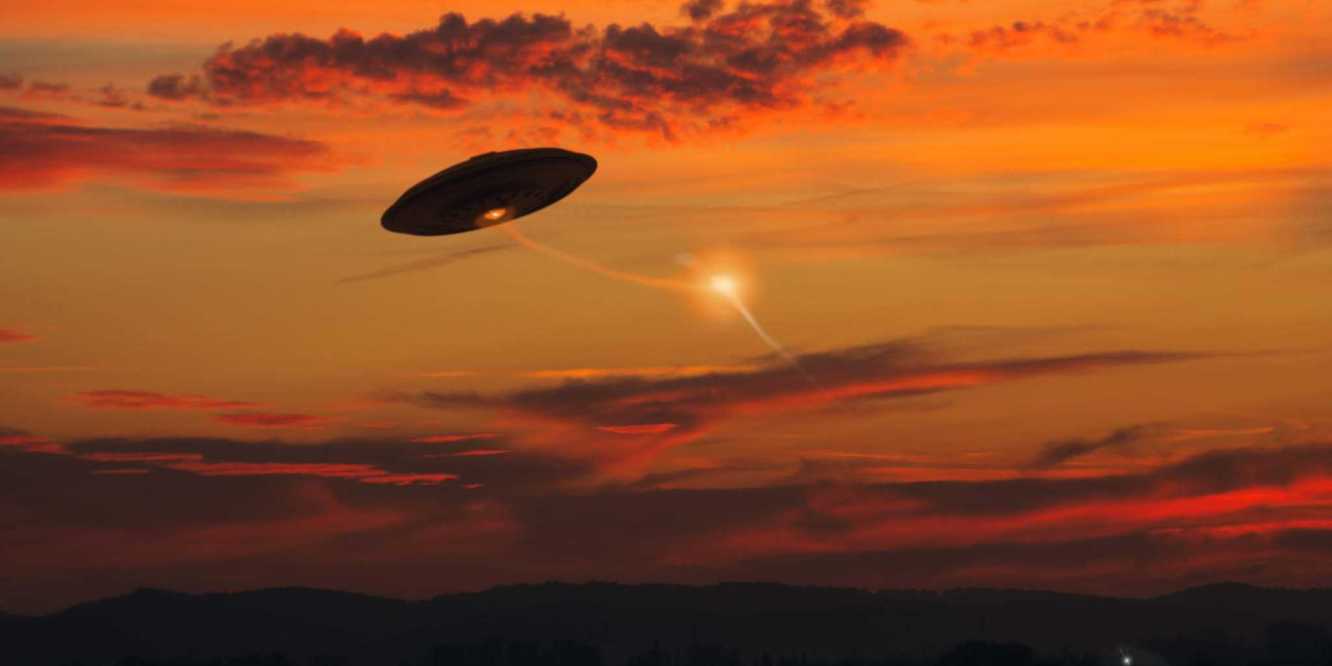 For years, the public has been fascinated by credible reports about Navy pilots encountering unidentified flying objects and secret Pentagon investigations of them. For months, the public has been awaiting the release of a legally mandated intelligence report laying out what the U.S. government knows about these mysterious craft, which appear to do things outside the reach of known technology. And for days, the public has been disappointed after it was widely reported last week that the unclassified portion of this document will offer neither evidence that UFOs are the product of alien civilizations or credible theories as to what they actually are—though it will, apparently, insist that they are not part of secret U.S. programs.

One of the more interesting things going on here, though, has to do not with the actual report, but with a possible explanation for UFOs that’s beginning to surface: That what Navy pilots have been seeing are actually, conveniently, in fact the products of advanced Chinese and Russian experiments with an exotic missile technology on which Donald Trump lavished billions and on which Joe Biden is planning to lavish still more.

The first outlet to break news on what will and won’t be in the UFO report was the New York Times, which on Friday published a story that, in addition to laying out the basic findings and stressing that the government is unable to rule out that UFOs are of extraterrestrial origin, offered an explanation, attributed to an unnamed senior official: These are possibly the results of Chinese or Russian experiments with hypersonic weaponry.

“Russia has been investing heavily in hypersonics, believing the technology offers it the ability to evade American missile-defense technology. China has also developed hypersonic weaponry, and included it in military parades. If the phenomena were Chinese or Russian aircraft, officials said, that would suggest the two powers’ hypersonic research had far outpaced American military development.”

In its own brief report, the Wall Street Journal confirmed that defense leaders are fretting over the possibility that UFO sightings are the result of foreign enemies working on advanced hypersonic capabilities:

“One possibility officials have debated is that the craft are the result of secret research programs by a foreign adversary, such as Russia or China, both of which are believed to have experimented with hypersonic craft, which can travel more than five times the speed of sound.”

One problem with this is that there is, technically, no such thing as a hypersonic weapon. The phrase is a marketing term describing different unproven technologies, including boost-glide vehicles and cruise missiles. These aren’t different from the ballistic missiles on which various countries have long mounted nuclear warheads because they’re fast—ICBMs travel at 20 times the speed of sound—but because they travel at relatively low altitudes, rather than leaving the atmosphere before descending on a target.

As Cameron Tracy of the Union of Concerned Scientists, an expert on the subject and co-author of a recent paper subjecting claims made about hypersonic weapons to math, explained to Motherboard, “Hypersonic weapons are actually, compared to ballistic missiles, uniquely slow.” The main utility of these technologies isn’t that they could allow payloads to move or reach a target more quickly; it’s that because they fly closer to the surface of the earth, they could theoretically frustrate defense systems designed to intercept missiles as they travel in outer space.

A more salient problem is that hypersonic weapons not only do not but cannot behave in the ways the UFOs that have gripped the imaginations of the public and the Pentagon do. If the idea that these craft are piloted by grey aliens intent on treating humanity as livestock seems magical, it’s more realistic than them actually being revolutionary, physics-defying variants of known weapons systems. In a 2017 Times article, for instance, Navy pilots described a 40-foot long oval craft seemingly rising out of the Pacific Ocean, hovering, and then accelerating away at incredible speeds. This is not something any hypersonic weapon could do, according to Tracy.

“When we talk about diving underwater, this is not possible for a hypersonic vehicle,” said Tracy. “Traveling through air, which is quite low density compared to water, already involves some huge challenges. As you travel through fairly dense air, there is enormous heating of the air surrounding the vehicle. When it travels at hypersonic speeds, shockwaves form in that air. You have actually some complex chemistry where molecules in the air can start to break apart. It’s really a challenging environment to fly through. A lot of that heat will damage your vehicle, it will degrade the surface of it. Those kind of unusual molecules, atoms, now present in the air will react with the surface of your vehicle. It’s just a huge challenge to do. If all of a sudden we’re talking about water, something obviously much denser than air, that becomes essentially an impossibility.”

In a 2019 Times article, years later, pilots described craft making “sudden stops and instantaneous turns.” This is, again, not something a hypersonic weapon can do, according to Tracy. (Experts who spoke to ABC concurred.) He was especially incredulous at the idea that a boost-glide vehicle, which is the fastest type, could do it.

“A hypersonic glider—they can turn,” he said. “They fly through the atmosphere. They generate lift as they fly. They work, in many ways, like a much faster commercial aircraft. They can turn, but they can’t turn that sharply. If you think about something traveling, say, 10 times the speed of sound, it turns by generating lift. So in typical, straight-forward flight, it would generate lift in the upwards direction, to counteract gravity. That’s what helps it stay aloft. That’s what gliding is, just like an airplane does. If it wants to turn to the left or right, it can just rotate a bit, so that a portion of that lift force that it’s generating is then pointing to the left or right. So if we imagine realistic scenarios where—you can’t completely stop generating lift up because you still have to stay aloft somehow; you have to counter gravity—then realistic turning forces you might generate would start pushing you to the left or right at some certain rate, some acceleration in that direction. “

“Now you’re already traveling 10 times the speed of sound forward, so even if we have that same lift force now acting entirely to the left or right, it’s going to take you some time to really start turning quickly to the left or right, and in that time it takes you’re going to fly forward a very long distance. For realistic situations, you might have a turning radius of hundreds of kilometers—a thousand kilometers or more, possibly, for higher speeds. So this instantaneous 90-degree turn? That’s something that’s not possible. The forces involved just don’t work out.”

There are even more basic reasons to find the hypersonic weapons theory obviously nonsensical. The idea that China and Russia—which spend, respectively, less than a third and less than a twelfth what the U.S. does on defense—would have technology not just more advanced than what the U.S. has but so much more advanced that it can’t be identified strains credulity, for instance. And so does the idea that these countries would have arrived at innovations so far removed from the state of known technologies as to be functionally magical. While Tracy declined to speculate on the truth behind UFOs, “There are a lot of explanations one can imagine that are more realistic than a new class of hypersonic weapons,” he said.

Despite these inconvenient facts, the claims of unnamed officials have spread wildly through the media ecosystem, with a number of British tabloids and local news stations describing the ominous threat of hypersonic weaponry in at times apocalyptic terms. Oddly, this is happening just as Biden’s budget proposal seeks $3.8 billion in spending on these weapons—far more than Trump, who called them “hydrosonic,” ever asked for—and despite recently published research by Tracy and his colleague David Wright showing that the claims made about this purportedly new class of weapons are largely nonsense.

Just how advance notice of a report drawn up by the Office of the Director of National Intelligence in collaboration with the Pentagon on the UFO phenomenon ended up hyping the possible threat posed to the United States by nearly useless technologies on which defense officials with reputations to maintain want to spend billions will perhaps never be known. Those seeking insight, though, could do worse than turning to the paper Tracy and Wright wrote, which proposed that “The persistence of misperceptions regarding hypersonic weapon performance has resulted from social processes by which erroneous technical facts have been socially constructed and promulgated by organizations developing these weapons.” It attracted respectful, in-depth coverage in the New York Times.