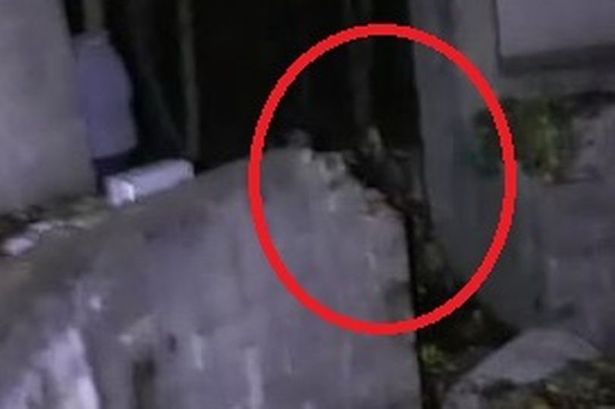 By: Jake Loader and Paige Freshwater

An eerie ghost has been caught on camera at an old Second World War site, paranormal investigators claim. The “images of soldiers” were snapped after the ghost group Matrix Paranormal UK, from South Yorkshire, probed an old heavy anti-aircraft gun site.

They say they heard unexplained footsteps in the entrance to the site, near Stallingborough, Lincolnshire. Group founder Yvonne Hunter told Grimsby Live: “These images coincided with ourselves hearing footsteps, activity with trigger objects, which shows one of the investigators checking out the area for anyone else in the location.”

The military structure was built in 1944 to help shoot down the Nazi Luftwaffe plans bombarding Britain with bombs.

It’s a Grade II-listed structure and not many people can even remember its top-secret construction.

Nature has reclaimed the site and more than 75 years on from its construction, only explorers and paranormal investigators venture into the structure.

Yvonne added: “The investigation lasted approximately two-and-a-half hours and was quite active with apps, ITC equipment and trigger objects.

“The only sounds we heard clearly were footsteps, the rest of the noises were natural for the environment and weather, which was cold and calm”.

“By the end of the investigation, we considered the area to be active and interesting and we would return for a future investigation at some time in the near future.”

She said: “I would like to know if any other witnesses or members of the public have noticed any activity in this area or have any further history, memories or knowledge regarding this site.”

But not everyone was so sure about the supposed ghost spot.

One local joked: “I can see a flying saucer about to land as well.

Whilst another internet user commented: “Looks more like a finger smudge… I get them on my glasses.”