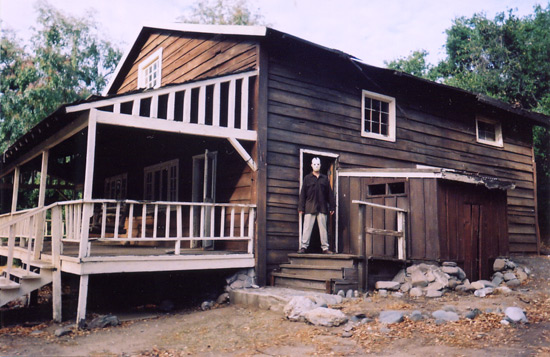 Unlike the original two Friday the 13th movies, which were filmed in New Jersey and Connecticut, Friday the 13th Part III brought the franchise to California, with the Veluzat Motion Picture Ranch in Santa Clarita Valley playing host to the primary “Higgins Haven” location. Alas, that house burned down back in 2006, forever changing the iconic filming locale.

All these years later, Fridaythe13thFranchise.com reports, the “Higgins Haven” structure is being rebuilt as it originally looked, a scoop which comes courtesy of YouTube’s Scott on Tape!

During a visit to the Friday the 13th Part III filming locations that Scott uploaded this month, he notes that the owner of the Veluzat Motion Picture Ranch broke the news to him.

“They’re rebuilding it. [Owner Daniel Veluzat] is gonna rebuild it exactly the same… to look exactly the same,” Scott notes in the video, which you can check out down below.

“Soon we’re gonna be putting the house back in, putting the lake back in,” Veluzat himself confirms. “Kinda rebuilding this Friday the 13th set back to its original glory days. There’s even talks of something happening down the road. So, we’ll see what happens.”

As for the barn from Friday the 13th Part III, that particular structure still stands on the ranch to this day, looking much the same as it did back in the early 1980s when the movie filmed.

At this time, the Veluzat Motion Picture Ranch is not open to the public.